The noise machine plays static, what they call “Rain” tho it sounds more like a dripping faucet. I used it last night but I don’t really need it much anymore. It’s quiet here, very quiet until the early morning when the neighborhood starts to wake and an occasional car zooms past. Three years ago, I lived in an apartment that had no windows in the bedroom. There was a giant sliding barn door closing it off from the light of the oversized windows in the next room. I’d never seen a bedroom with no windows. But as I got used to the total darkness I really liked it. It was the silence that was foreign to me. The loft was on a cul de sac and even though it was completely urban there were no sounds. It was so quiet I needed a noise machine just to cut through that strange silence. From that silent haven I moved to a lovely neighborhood in Brooklyn, where my bedroom windows were just a short distance from honking and horn blasting and semi downshifting on the expressway. Despite the noise, I liked my little apartment, except for the occasional giant water bug that would come from nowhere and suddenly be at my feet.

I’m in a new place now, with no bugs. The neighborhood is quieter, there is a different kind of of culture. Things are cheaper, I don’t spend $4.00 on an avocado. There are some hipsters here, and people who look like me, but mostly the neighborhood has held onto its identity and it is still eastern European. There are bakeries who’s names have lots of consonants, markets with wooden fruit bins outside, and, like many New York neighborhoods, a non-homogeneous population. I like it. I am a minority here, a native English speaker. I live on a lovely block of 3-story brick Renaissance Revival row houses with bay windows. It is a designated historic district so I guess no one can build some crazy structure on the outside of their home or brick up the windows or anything. They all look pretty similar and sometimes walking back from the train, I can’t tell which one is mine right away.

Across the back patio there is a 6-story apartment building about 50 yards beyond, mushroom color painted over the brick. The fire escapes have some peeling paint and little trails of rust stains on the bricks make it look a little seedy. At night some of the windows have a warm, yellow glow. There are no window coverings at this time of the evening, twilight. That will come later. But for now we all enjoy a furtive glimpse of one another, yet there is no voyeurism. We feel connected, safe in our own space yet present to the daily rituals of our neighbors. There is the woman and her husband on the floor above mine, every night cooking dinner and having animated conversation. Her blonde hair reminds me of one of those cigarette ads in the old Life magazines. I imagine she is wearing pedal pushers. Her waist is tiny and she always wears a little belt. She frequently looks out the window at me, with a cocktail in her hand. I’m having a cocktail too, and glance up briefly. Above their apartment, there is harsh light from an old, round florescent ceiling fixture and the windows have sheer polka dot curtains. A kitty lives here and likes to sit on the sill in the sunshine. In the early evenings, the building has the look of an Edward Hopper painting. His dark underpainting and flat colors illuminate the stark beauty and highlight urban loneliness. Someone once said about Hopper’s work that ‘even a buzzing city doesn’t remedy isolation, but heightens it.’

We moved to this house only a month ago. There will soon be a grandchild here. I’m curious about the sex, but the parents don’t seem concerned. So we will just have to wait. Never dreaming of being a grandmother, I’ve arrived at this place with unexpected delight. I’ve already checked out the toddler activities at the library 2 blocks away. There will be challenges for the parents, raising a child in New York. Carrying a stroller down the subway stairs, for one thing. E.B. White wrote in his book Here is New York, “the city is uncomfortable and inconvenient; but New Yorkers temperamentally do not crave comfort and convenience – if they did they would live elsewhere.” A New York childhood –less grass, the constant chaos of traffic. but growing up in one of the most diverse cities on earth, she will learn to be inclusive and tenacious. She will learn to live closely with others who come from very different backgrounds. I’m looking forward to all the good things. And I won’t wake when the baby cries in the middle of the night. I will be two floors away with my noise machine. 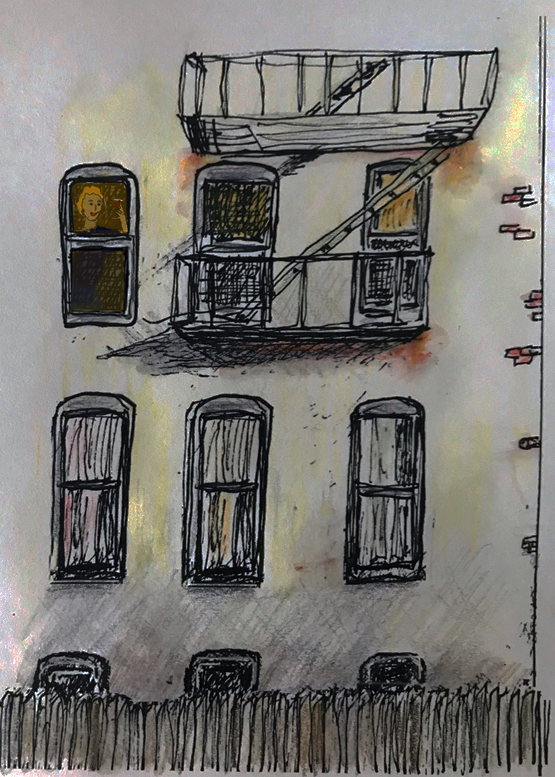