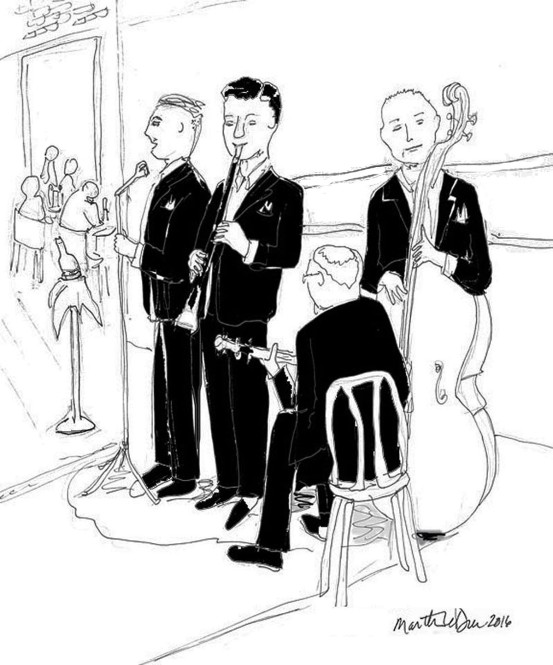 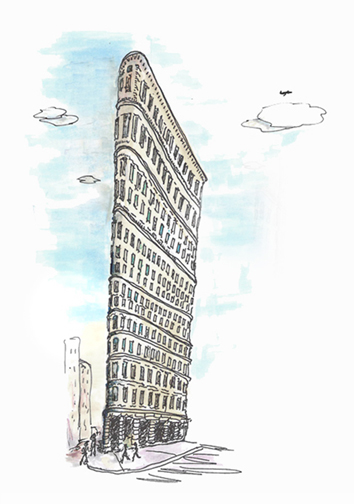 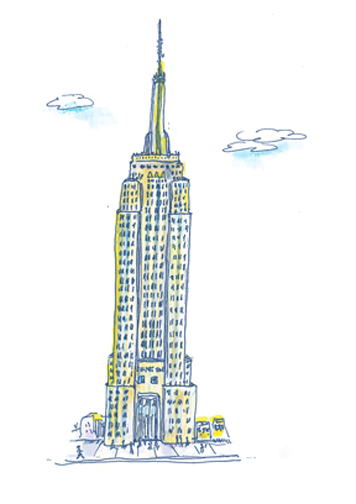 The Chelsea neighborhood in New York boasts many art galleries. The openings can be big events and are a fun way to see several in one evening, with wine, snacks and plenty of socializing. Many of the buildings are large spaces with a few galleries on different floors and from my short time here, I’ve noticed many of them seem to have slow, teeny, tiny elevators. And since there are several openings on the same night there’s be a big line just to get up to the second floor, since using the stairs is not allowed after 6 pm. Last week on a balmy January eve, I picked a block between 10th and 11th to see three gallery openings. After a long wait and a short ride to the second floor galleries, the elevator doors opened to an already large crowd, dressed mostly in black. Right there, standing behind a table of snacks a nice young man in a white shirt eagerly asked, “red or white?” Red was my choice tonight. Cheese cubes with toothpicks, and a few Triscuits in hand, I was off to enjoy myself. I wandered through the crush, feeling right at home dressed in my usual black.

Often during gallery hops, I have an inner discourse with myself, an ongoing discussion in my head. Your art is better than this, myself hisses to myself. Why isn’t your art hanging here? Talk to people! Hand out your card, you slug, you have the talent to be in a gallery. I had to ignore my left/right brain bickering for the moment. I had to move on.

I saw a series of 3 works that had large bleeding blobs of black ink on newsprint paper. I got closer. Perhaps there was something meaningful, deep, and not just something that looks like a big accident. I’m an artist – I love abstract, non-representational stuff, so I have a true appreciation for the mystery and wit of a good blob – but more like a Jackson Pollock blob. These pieces reminded me of the rejects I toss out when I paint. I should hold on to that stuff from now on. A price list wasn’t around, but I’m sure they weren’t cheap. The framing was top notch though, boosting the value of these mediocre pieces, and giving them an undeserved dignity.

Friends gathered around the artists, an appreciative coterie, taking pictures, proud of their artist comrade who somehow, for reasons completely beyond my comprehension, got into a group show. In a gallery in Chelsea!! Do I seem bitter? Maybe a smidge. It’s my own fault, of course. I think my work should be there. And yet I don’t do much to promote myself. These artists must have had an ‘in’, but more importantly, they networked and maybe hired an agent to promote them. I need to do more schmoozing. I need to be a self-promoter. I need to have what it takes. When I figure out how to do that, I’ll be here posing for pictures with my enthusiastic devotees.

It was too beautiful outside to go home just yet. The street was wonderfully alive with enthusiastic gallery hoppers. I headed over to the next gallery down the block to appraise more art. Maybe I’ll have white this time. 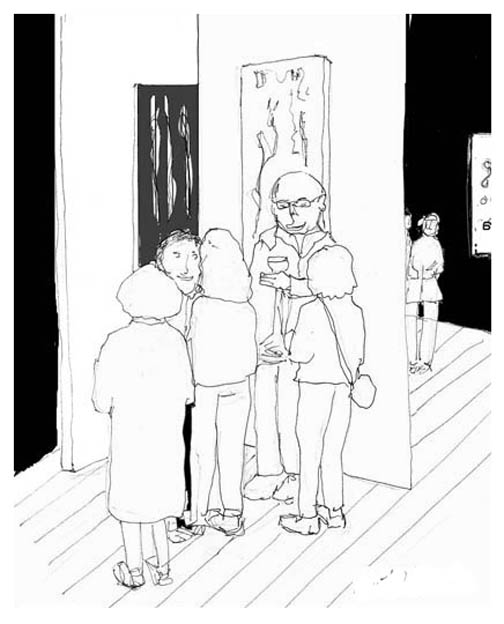 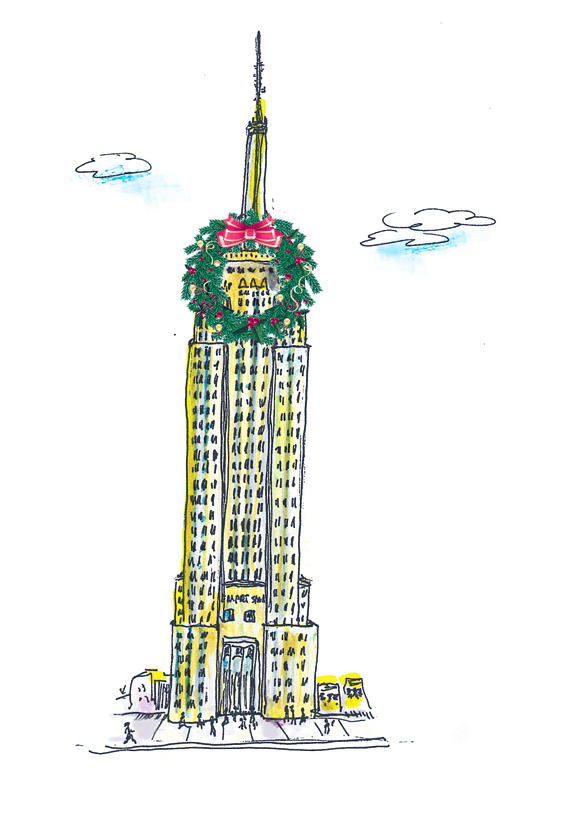 I haven’t written anything on here in two months. Embarrassed, ashamed, how can I call myself a writer?  Anyway, I’m drinking a tequila as I’m writing this because I heard it’s very healthy. That, and it’s really tasty.  Agave and stuff, supposed to kill bad bacteria. Unparalleled health benefits AND a slight buzz? Of course.

Last September, I made an unceremonious exit from the job I’ve had for 15 years. No one was in the office. I left just in the same way I’d spent most of my days there–alone.  Said good bye to a couple friends and walked away. It felt good at the time.

So after months, I finally got a small part time job in retail since no one will hire me for a real job. I keep tweaking my resume, taking out the years worked so I don’t appear to be quite so old and decrepit. Some of the dates on my resume predate the birthdays of the people reading it; they are reading the resume of their grandmother. Maybe this final tweak will do it, eliminating all those 1980 years – hey, I could be 35 years old. I did have one great hour-long interview but then she never called me back. It’s been over a month. Maybe she can’t decide how much to pay me and wants to make sure she doesn’t insult me with a lowball offer.

Last week I left my apartment with no key, no phone, no metro card, and no money. I bummed $5 from the coffee shop across the street, and a random stranger gave me a metro card  – expired, but it was very thoughtful of her. I took the train a couple stops to my daughter’s office and picked up a key to get into our apartment building. I was really hungry. I hadn’t eaten and I’m pretty sure I was starting to halucinate (low blood sugar.) Checking out candy wrappers lying on the ground…perhaps a little something left inside? Walking through the tunnel to the train, I felt a real, albeit extremely superficial, kinship with the homeless guy living outside the station on a cardboard box.  I had nothing but the clothes I was wearing. No id, no phone, no money. But I could call someone. What does Homeless Guy do when he’s hungry?  Can he contact someone? Does he have a phone? Homeless people are all over, most I think are mentally ill, sleeping on cardboard boxes, surrounded by their treasures. I walk by but I don’t respond. They ask, ‘can ya help me out so I can get some food?’  What would a measly dollar do, I think. But yet, a dollar would have gotten me a snack.  I’m guilty of ignoring them. I wish I could give them $20 when I pass by, but I don’t have a job.  I’m not homeless. I’m lucky.  And I don’t compare my 2 hour adventure to the culture of the street people who go it alone every night. It overwhelms me sometimes, tho I still love this city every day. I know the feeling isn’t mutual. I don’t care, I’m gonna stay for awhile. 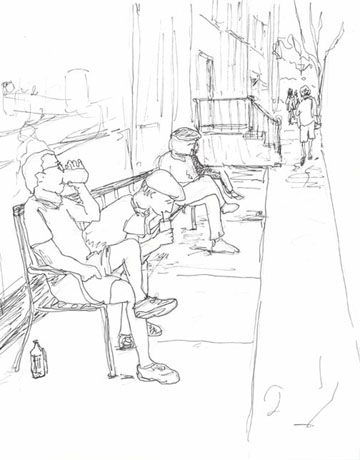 Early evening on the F train last week, a very cute and happy looking 20-something black man in a Hawaiian shirt was sitting alone taking selfies. Smile. Flash. Smirk smile with head tilt. Flash. Smile with teeth. Flash. He was leaning his head on the window, thus his phone was pointing at the darkened window and each time the flash would bounce off. But he seemed very pleased with his results. He’d look at each one he took, nodding and smiling.  No one was really paying any attention. I’m learning that the city gives you permission to do that kind of weird stuff. People seem to respect your right to do it, generally with no outward judgment.
Last week I was coming home.  Midnight. 2nd Ave subway station. A young woman dressed in black, leaning against the white tiled wall, black hair, very white skin and a black tattoo on her shoulder, was playing an accordion. French songs, from the movie Amelie. It was haunting and evocative, the sound floated in the almost empty station. (I did some googling and found out her name is Melissa Elledge.) I stood and watched her, smiling. I felt so strangely happy. It was ‘a moment!’ I was having a moment. I didn’t want to leave, I wanted to miss the train and stay all night.
The lower east side is one of my favorite places. It feels so authentically New York – the term gritty comes to mind. The East Broadway stop is described variously: garbage strewn, excessive rat population, poor lighting and lacking ventilation. It is the bastard child of the system and seems to be passed over for upgrades and rehabilitation. I met a fun and knowledgeable guy there for a tour of several square blocks of the area. A born and bred lower east sider, he was eager to share it all with me. Describing what used to be where, pointing out the painted-over facades that hid the building’s history; the apartment where he grew up and made many life-long friends; The Lots (a strip of grass and dirt under the Manhattan Bridge where many ballgames were played); nondescript buildings that housed secret clubs where mobsters still congregate.  The capital of Jewish America at the turn of the century, there used to be several synagogues there, but now only a few remain as synagogues, as the population changed from mostly Jewish and Italian, to Latino and Chinese. After stopping at a Chinese grocery, where you can get plump, fresh frogs, we headed to a beautiful, old restored synagogue for a presentation on the History of the Knish. Yes, a hundred or so people actually attended this. (I got two knishes –my first ones ever.)
Two people vomited yesterday on two different platforms. I was waiting for the third sighting, since, y’know, things happen in threes. It no doubt occurred somewhere within this vast network. Fortunately I didn’t have to see it.
Frustrating and fascinating, it is an amazing system, always getting me where I want to go, sometimes too stuffy and crowded, always interesting and entertaining. The subway is the great equalizer. Well-dressed business people, tourists, the rich and not so rich. We’re all standing together in the stinking, stuffy, urine soaked underground, watching the rats. 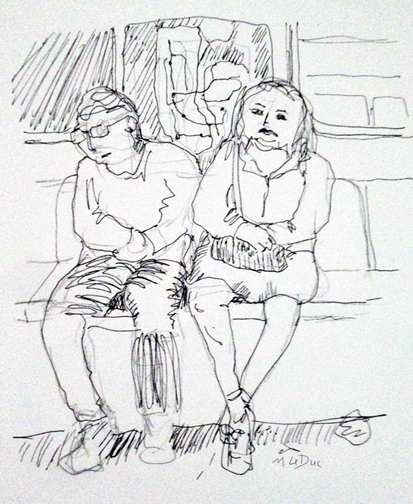